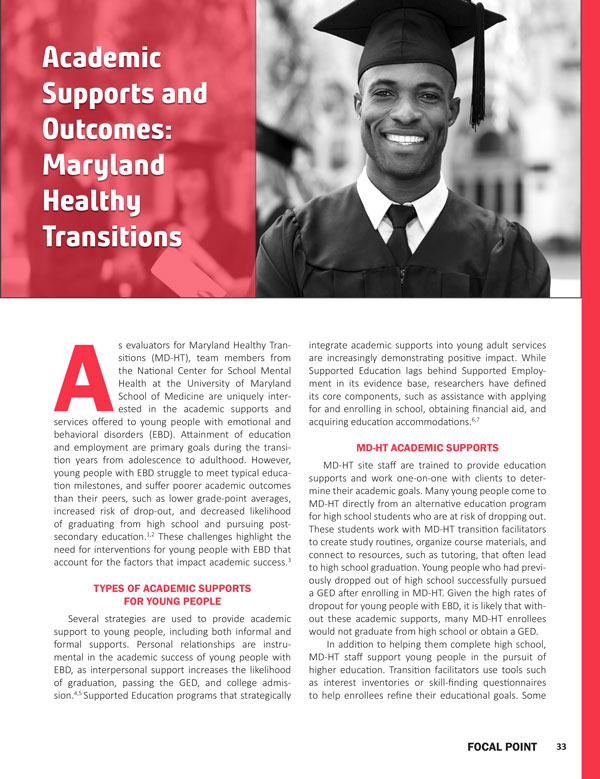 Abstract: The MD Healthy Transitions program focuses on academic supports for young people with emotional and behavioral disorders. Authors describe the program and the quantitative and qualitative findings on the program’s outcomes.

As evaluators for Maryland Healthy Transitions (MD-HT), team members from the National Center for School Mental Health at the University of Maryland School of Medicine are uniquely interested in the academic supports and services offered to young people with emotional and behavioral disorders (EBD). Attainment of education and employment are primary goals during the transition years from adolescence to adulthood. However, young people with EBD struggle to meet typical education milestones, and suffer poorer academic outcomes than their peers, such as lower grade-point averages, increased risk of drop-out, and decreased likelihood of graduating from high school and pursuing post-secondary education.1,2 These challenges highlight the need for interventions for young people with EBD that account for the factors that impact academic success.3

Several strategies are used to provide academic support to young people, including both informal and formal supports. Personal relationships are instrumental in the academic success of young people with EBD, as interpersonal support increases the likelihood of graduation, passing the GED, and college admission.4,5 Supported Education programs that strategically integrate academic supports into young adult services are increasingly demonstrating positive impact. While Supported Education lags behind Supported Employment in its evidence base, researchers have defined its core components, such as assistance with applying for and enrolling in school, obtaining financial aid, and acquiring education accommodations.6,7

MD-HT site staff are trained to provide education supports and work one-on-one with clients to determine their academic goals. Many young people come to MD-HT directly from an alternative education program for high school students who are at risk of dropping out. These students work with MD-HT transition facilitators to create study routines, organize course materials, and connect to resources, such as tutoring, that often lead to high school graduation. Young people who had previously dropped out of high school successfully pursued a GED after enrolling in MD-HT. Given the high rates of dropout for young people with EBD, it is likely that without these academic supports, many MD-HT enrollees would not graduate from high school or obtain a GED.

Post-secondary program applications are often complex and lengthy, so MD-HT staff provide support and guidance. This includes completing the Free Application for Federal Student Aid (FAFSA), which involves gathering legal information from the enrollee's parent(s) or guardian(s), and applying for scholarships together. MD-HT staff write letters to institutions on behalf of the applicants. Additionally, an MD-HT site may provide direct financial support to pay for costs not covered by financial aid.

In the interest of understanding the academic goals and outcomes of MD-HT participants, and to shape programming, the evaluation team has collected, analyzed, and shared education data at regular intervals with program funders and implementers. A mixed methods approach (using both quantitative and qualitative data) was used and is detailed below with preliminary findings from baseline to six months after enrollment.

As part of the MD-HT evaluation process, transition facilitators collect data on the National Outcome Measures (NOMs).8 These data include a variety of demographic and functioning items, in addition to education and employment outcomes. At baseline, the majority (61.6%) of the 198 enrollees who were over the age of 18 were not enrolled in any education or training program. However, around 60% of the 40 enrollees under the age of 18 were enrolled, as many were in high school. As transition facilitators worked with the young people to refine their academic goals and apply for appropriate programs, the biggest increases in enrollment occurred among the 82 young people who entered MD-HT with a least a high school diploma or GED. Between the baseline and six-month assessments, for the 122 young people who completed both assessments, the percentage who were not enrolled in any training or education program dropped from 78% to 70.7%, while the percentage enrolled in a program increased from 22.0% to 29.3%.

Transition facilitators also assess "perceptions of opportunity" among youth, including beliefs about the importance and likelihood of achieving specific goals. While some youth were unsure of their academic and career goals upon entering MD-HT, a majority (87%) reported that graduating from college was either "very important" or "somewhat important." Of the 196 enrollees who rated graduating from college as "very important" or "somewhat important" upon enrollment, 85 (43.36%) rated their chances of doing so as "good," 84 (42.86%) selected "fair," and 27 (13.76%) selected "poor." These perceptions remained relatively stable six months into the HT program. Therefore, several HT participants who think that it is important to graduate from college perceive that they will be unable to do so.

In addition to quantitative data collection, transition facilitators conducted 32 interviews with HT participants during re-assessments to further inform the impact of the education and employment supports. Interview topics included progress made with transition facilitators, perceptions of services, and education and employment goals and challenges. Most respondents said they had discussed education with their transition facilitator, and some stated they had made plans to obtain their GED, find a suitable trade school, or prepare for and apply to college. They reported that the education services were important because gaining independence, getting an education, and making money were necessary components of supporting themselves. One young adult stated that the services were important because "I would like to have my own funds and take care of myself and have a good future." Many enrollees linked their educational goals to their vocational goals, and referenced the connectedness between getting their GED/high school diplomas, graduating from college, and finding a job they enjoy that can support them financially.

When asked about barriers to academic success, many participants listed that their mental health prevented them from succeeding in school. One student reported that, "my anxiety and depression affect my attendance and focus, and my autism affects my communication with teachers." In addition to financial needs, other barriers included dedicating time and energy to determine goals before proceeding. Most young people reported that the educational services helped them succeed in a current school, get into a new school, and improve their emotional and mental well-being. The enrollees said they felt more prepared for their futures, more confident in their abilities, and more motivated to do better for themselves. They also mentioned the amount of support received from the transition facilitators made a huge difference in their lives, with one participant stating that the services "saved my life."

Informal and formal academic supports are especially important for young people with EBD and can promote positive educational outcomes, including high school and post-secondary graduation. In Maryland, MD-HT staff provide an array of academic support services that align with emerging core components of Supported Education. In addition to a modest increase in education enrollment among MD-HT participants, they report that HT services and supports are critical to attaining their educational and career goals.