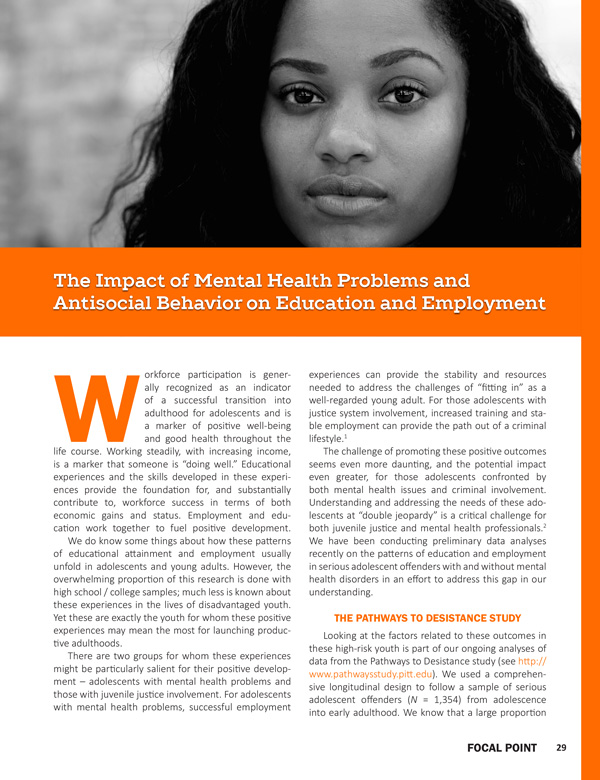 Abstract: This article details findings from a study of the effects of various factors on recidivism and employment and educational outcomes among serious adolescent offenders.

Workforce participation is generally recognized as an indicator of a successful transition into adulthood for adolescents and is a marker of positive well-being and good health throughout the life course. Working steadily, with increasing income, is a marker that someone is "doing well." Educational experiences and the skills developed in these experiences provide the foundation for, and substantially contribute to, workforce success in terms of both economic gains and status. Employment and education work together to fuel positive development.

We do know some things about how these patterns of educational attainment and employment usually unfold in adolescents and young adults. However, the overwhelming proportion of this research is done with high school / college samples; much less is known about these experiences in the lives of disadvantaged youth. Yet these are exactly the youth for whom these positive experiences may mean the most for launching productive adulthoods.

here are two groups for whom these experiences might be particularly salient for their positive development – adolescents with mental health problems and those with juvenile justice involvement. For adolescents with mental health problems, successful employment experiences can provide the stability and resources needed to address the challenges of "fitting in" as a well-regarded young adult. For those adolescents with justice system involvement, increased training and stable employment can provide the path out of a criminal lifestyle.1

The challenge of promoting these positive outcomes seems even more daunting, and the potential impact even greater, for those adolescents confronted by both mental health issues and criminal involvement. Understanding and addressing the needs of these adolescents at "double jeopardy" is a critical challenge for both juvenile justice and mental health professionals.2 We have been conducting preliminary data analyses recently on the patterns of education and employment in serious adolescent offenders with and without mental health disorders in an effort to address this gap in our understanding.

The Pathways to Desistance Study

Looking at the factors related to these outcomes in these high-risk youth is part of our ongoing analyses of data from the Pathways to Desistance study (see http://www.pathwaysstudy.pitt.edu). We used a comprehensive longitudinal design to follow a sample of serious adolescent offenders (N = 1,354) from adolescence into early adulthood. We know that a large proportion of serious adolescent offenders decrease their criminal involvement as they enter adulthood, but we know little about the factors that promote this widely-observed pattern. This study, therefore, set out to examine the effects of changes in developmental capacities (e.g., impulsivity), social contextual factors (e.g., living arrangements), and intervention-related experiences (e.g., being placed in an institution) on future criminal offending, with the goal of informing justice-related interventions to promote positive outcomes.

The adolescents followed in the study were at least 14 years old and less than 18 years old at the time they were found guilty in court of committing a serious offense (almost exclusively felonies). Half of the sample was from Phoenix, AZ and half was from Philadelphia, PA; 84% were males; and the sample was ethnically diverse. The adolescents were, on average, 16 years old at the beginning of the study. A large proportion of the sample (93%) was included in our analyses of education and employment outcomes.

The youth participated in a baseline interview and a series of ten follow-up interviews (at six-month intervals for the first three years and yearly thereafter through seven years). These interviews were very comprehensive, using a variety of established measures, including the Composite International Diagnostic Interview3 to assess the presence of major depression; dysthymia; mania; drug or alcohol abuse and dependence; and post-traumatic stress disorder (PTSD) in the year prior to the baseline interview. Also, a portion of the follow-up interview used a life calendar approach4 to capture the nature, number, and timing of important changes in the life circumstances of these youth (including periods of employment and academic success).

Getting an accurate reflection of changes in employment and education over this follow-up period required a few important data manipulations. First, we asked the adolescents about formal ("legal work") and informal ("under-the-table") employment situations and converted information about number of jobs, hours worked, wages earned, and job interruptions into a monthly amount of money earned. Second, we recognized that school attendance would be expected to decrease over the time period of the study, and employment would be expected to increase, possibly dependent on different factors in the youth's life. Thus, a focus on either school attendance or employment alone does not sufficiently reflect positive adjustment.5 So, we consolidated school attendance and employment information into a single construct ("gainful activity") intended to indicate the youth's involvement in age-appropriate social roles over the recall period. Finally, we also recognized that both education and employment participation are affected when youth are removed from the community as part of legal sanctions (i.e., sent to an institution). To account for this, the time spent in out-of-community placement was controlled for at each assessment wave.

We are still running analyses of the data to determine how education and employment experiences differ in juvenile offenders with and without mental health problems and the factors related to marked increases in earning power or stability of employment. So far, though, we have seen several consistent patterns in the data in our preliminary analyses.

1. The overall histories of employment and education appear the same in the adolescent offenders with and without mental health diagnoses.

Evidence from prior studies indicates that adolescent offenders are not a homogenous group doomed to uniformly poor education and employment outcomes. Thus, one of our initial goals was to examine variation in patterns of education and employment for youth over the 7 years of follow-up, and to see if these patterns looked different for the adolescents with mental health problems. We used a statistical technique called trajectory analysis to find distinct groups of individuals who follow the same pattern of change over the whole follow-up period on a particular outcome of interest.

We analyzed the group with a mental health diagnosis and the group without a mental health diagnosis separately on the outcome of "gainful activity" (i.e., how much they either went to school if they were supposed to be in school, or worked if they were out of school) to see how many distinct trajectories might emerge and what the shapes of these trajectories might be in each group. We found that each group (i.e., those with a mental health diagnosis and those without a diagnosis) produced essentially identical solutions. Each one had four distinct patterns with about the same proportions of the group in each one: one staying rather consistently high in gainful activity, one dropping off dramatically, one increasing slightly, and one staying consistently low.

2. Getting a high school diploma or technical certification does make a difference in earning power, whether you have a mental health disorder or not.

These two findings just reflect our initial analyses of how having a mental health disorder might or might not affect the adjustment of juvenile offenders in the community during early adulthood. So far, it does not appear that sorting juvenile offenders by the presence or absence of a diagnosable disorder has much predictive value. How the presence of a disorder interacts with opportunities or risk factors over time might be much more important. We are currently examining how shifts in mental health symptoms and involvement in treatment are related to employment patterns and earnings. We think that this more dynamic picture of the effects of a mental health problem will be more informative for practice and policy for this group of high-risk adolescents.