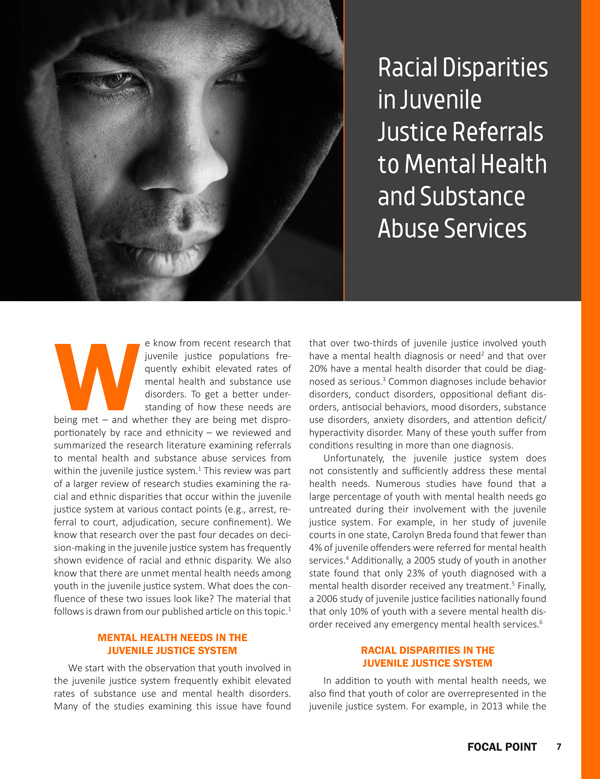 Abstract: This article examines the confluence of mental health needs and racial disparities within the juvenile justice system.

In addition to youth with mental health needs, we also find that youth of color are overrepresented in the juvenile justice system. For example, in 2013 while the national arrest rate for white youth was 26.0 arrests per 1,000 persons in the population, the arrest rate for African American youth was 63.6, nearly 2.5 times higher.7 Typically, national data shows that once youth of color are arrested and referred to court, they subsequently go deeper into the juvenile justice system than white youth and are less likely to be diverted or given more lenient dispositions such as probation. As another example, in 2013 the residential placement rate for African American youth was 4.6 times greater than for white youth.8 Although not as stark, similar patterns of disproportionate contact with the juvenile justice system exist for American Indian youth, Hispanic youth, and smaller ethnic groups.

Several large-scale efforts have synthesized and analyzed the body of individual research studies on racial disparities in the juvenile justice system. Most of these studies examine whether disparities still exist after legal and extralegal factors are taken into account. In the first such study, Pope and Feyerherm identified 46 studies published between 1969 and 1989 and concluded that the majority of studies found some impact of race on decision-making.9 They noted that the evidence suggested bias can occur at any stage of juvenile justice and, as minority youth progress further through the system, racial differences may accumulate and become more pronounced.

At least five subsequent reviews examined portions of the research literature between 1967 and 2014. Although each covered a slightly different set of research studies, the overall results were remarkably consistent. In the majority of well-designed research studies, racial and ethnic disparities may be found in many of the major decision stages in the juvenile justice system and cannot be fully accounted for by differences in the behavior of the youth involved: disparities in the handling of youth far exceed any differences in the behavior of these youth. It is also interesting to note that some research studies found no disparities and that the patterns of disparities appear to differ from one community to another and from one contact point to another.

Racial Disparities Among Referrals to Treatment

Given the disparities found in traditionally studied juvenile justice decision points (e.g., arrest, court referral, diversion, secure detention, petition, adjudication, secure confinement, probation, and transfer to adult court) and the fact that not all juveniles who need mental health services are treated in the juvenile justice system, are there also racial and ethnic disparities among referrals to mental health and substance abuse services? In our 2016 systematic literature review we found that a majority of studies published in the past 20 years found at least some race effect in the decision to refer youth to services.1 Studies were included in our review if they examined the decision to provide juveniles with mental health or substance abuse services in the juvenile justice system, included race or ethnicity in the analysis, used quantitative methodology, and examined a sample from a state or local system in the United States. Of the 26 studies examined, 69% found at least some race effect disadvantaging youth of color while 31% found no race effect. To account for potential differences in mental health and substance abuse needs by race/ethnicity, 19 of these studies provided statistical controls for scores on screening and assessment tools, prior mental health or substance use treatment, or drug/alcohol-related offenses. Of these 19 studies, 63% found at least some race effect while 37% found no race effect.

For example, a study of detained youth in Indiana, which included statistical controls for gender, age, detention center site, and whether the youth had a positive score on a mental health screening instrument, found that both African-American and Hispanic youth were less likely than white youth to receive contact with a mental health clinician within 24 hours of detention center intake and to receive a referral to mental health services upon detention center discharge. A study of mental health treatment service delivery for youth in secure facilities in Maryland found that while only 11.9% of the African American youth who met the diagnostic criteria for a mental health disorder received treatment, 42.6% of the white youth who met the criteria received treatment. Another study of juveniles who were adjudicated delinquent in Pennsylvania found that the court was less likely to send African-American and Latino youth to a therapeutic program than white youth compared with a physical regime program or a traditional reform school.

Included in the 63% of studies that found at least some race effect were studies that reported mixed effects. For example, one study of a Missouri court found that although there was no race difference in the rates of referral for substance use disorders, white youth were more than twice as likely to receive a mental health treatment order as compared to African American youth. These researchers included statistical controls for gender, age, legal variables, parental history of substance use and mental health disorders, peer influence, mental health status, substance use problems, learning disorders, and other personal issues.

On the other hand, 37% of the studies that controlled for mental health needs found no race effect. For example, a study of a county court in South Carolina found that race was not a significant predictor of admission to drug court after accounting for gender, age, legal variables, family status, and mental health history. Similarly, a study of youth processed through a Midwestern circuit court found that once all control variables – including assault history, history of abuse or neglect, behavior problems, learning disorder, negative attitude, and social environment – were introduced into the final model, race was not a significant factor.

The net effect of these disparities in the operation of the justice system and in referral for mental health and substance issues is to push a greater volume of minority youth into punitive systems and a greater volume of white youth into systems designed to deal non-punitively with their mental health and substance use problems. Resolving these inequities will require coordinated action from both sets of service providers: those in juvenile justice and those in the mental and behavioral health systems.