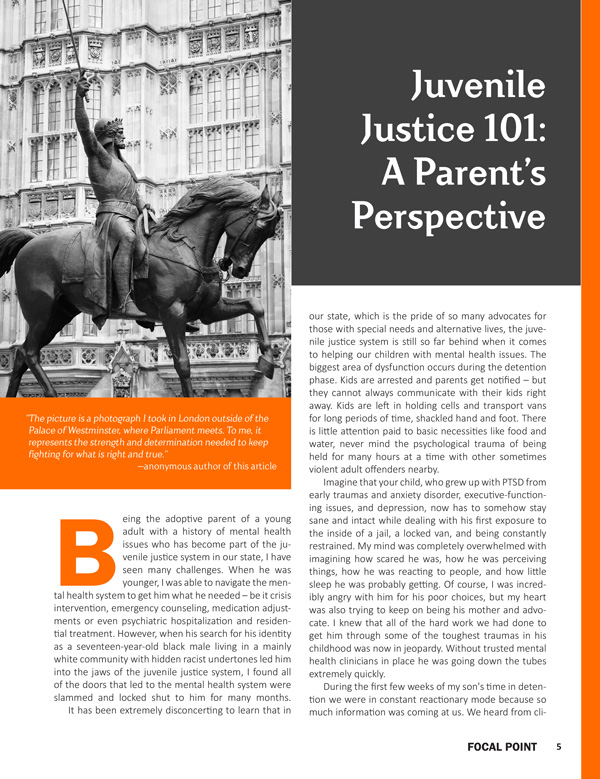 Abstract: The author recounts her son's experience within a juvenile justice system that exacerbated his mental health conditions.

Being the adoptive parent of a young adult with a history of mental health issues who has become part of the juvenile justice system in our state, I have seen many challenges. When he was younger, I was able to navigate the mental health system to get him what he needed – be it crisis intervention, emergency counseling, medication adjustments or even psychiatric hospitalization and residential treatment. However, when his search for his identity as a seventeen-year-old black male living in a mainly white community with hidden racist undertones led him into the jaws of the juvenile justice system, I found all of the doors that led to the mental health system were slammed and locked shut to him for many months.

It has been extremely disconcerting to learn that in our state, which is the pride of so many advocates for those with special needs and alternative lives, the juvenile justice system is still so far behind when it comes to helping our children with mental health issues. The biggest area of dysfunction occurs during the detention phase. Kids are arrested and parents get notified – but they cannot always communicate with their kids right away. Kids are left in holding cells and transport vans for long periods of time, shackled hand and foot. There is little attention paid to basic necessities like food and water, never mind the psychological trauma of being held for many hours at a time with other sometimes violent adult offenders nearby.

Imagine that your child, who grew up with PTSD from early traumas and anxiety disorder, executive-functioning issues, and depression, now has to somehow stay sane and intact while dealing with his first exposure to the inside of a jail, a locked van, and being constantly restrained. My mind was completely overwhelmed with imagining how scared he was, how he was perceiving things, how he was reacting to people, and how little sleep he was probably getting. Of course, I was incredibly angry with him for his poor choices, but my heart was also trying to keep on being his mother and advocate. I knew that all of the hard work we had done to get him through some of the toughest traumas in his childhood was now in jeopardy. Without trusted mental health clinicians in place he was going down the tubes extremely quickly.

During the first few weeks of my son's time in detention we were in constant reactionary mode because so much information was coming at us. We heard from clinicians and directors at various facilities about what our son would receive for support. He would have someone assigned to make sure that he could communicate with his lawyer and us, but that no counseling or therapy would be provided. He was moved from program to program due to various issues, some being in his control (arguing with peers) and others being completely out of his control (staffing issues, programs closing due to staff acting inappropriately). Each time I would see my son shutting down more and more, behaving erratically and having great difficulty thinking and processing. I would drive hours to and from locked units to see him for limited amounts of time, knowing that he would be strip-searched each and every time. My limited interactions with clinical staff showed that most barely knew my son. It took Herculean efforts and a chance message to a friend with connections to get a bit of informal counseling to him just as a way of keeping him treading water during this time. It was nine months before things changed for the better – when he was finally sentenced and committed to the Department of Youth Services until 21 years of age.

Once committed, therapeutic mental health counseling was put into place and I began to see gradual improvement in my son's mental health status. The damage was done, however. When he finally came home to us we saw a very stressed, changed young man who was prone to bouts of extreme anger and an inability to accept that people were there to be supportive of him. PTSD had really taken hold. Reactive Attachment Disorder, which had been simmering beneath the surface for years, was at full boil.

I am left to wonder, at this precarious stage in the game, if our son will ever fully recover from his experiences. He has admitted his mistakes and is having to live with the legal consequences of his actions, but I believe his mind is ravaged with the constant memories of things that happened to him while behind the walls of our juvenile justice system. We are living on a roller coaster of mood swings and rage. I wonder if some of this could have been prevented with more focus placed on assigning a skilled clinician who could do therapy with each and every juvenile as soon as they enter the system, rather than waiting for the rusty and inconsistent wheels of justice to expel the shattered minds of our children. Could this reduce the rates of recidivism? Could this improve the behaviors of more incarcerated individuals while they wait their turn? Could it keep more homes from being under strain when their children return?

Despite all he has been through, he continues to strive to be a better person. Our son was recently appointed to the Juvenile Justice Advisory Board by the governor. We hope that his personal experiences will help many others as time goes on.