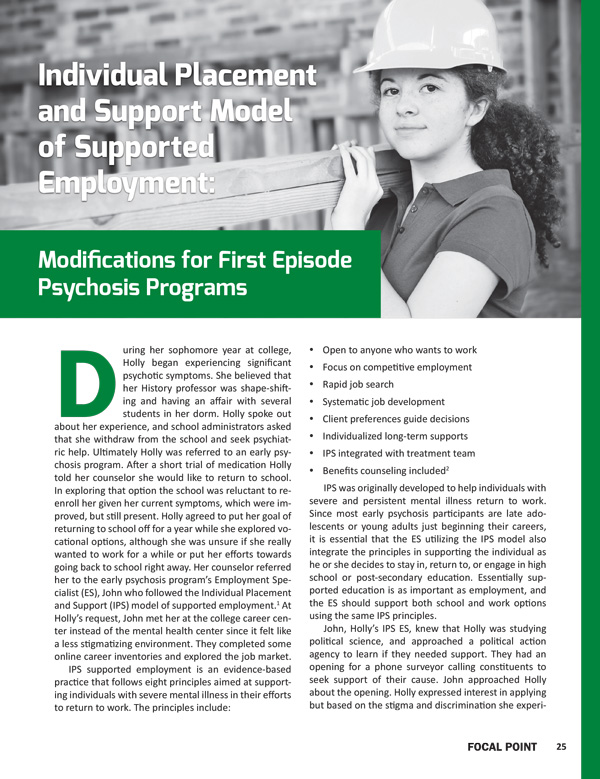 Abstract: This article provides tips for modifying Individual Placement and Support services to accommodate the typically younger audience that is affected by first-episode psychosis.

During her sophomore year at college, Holly began experiencing significant psychotic symptoms. She believed that her history professor was shape-shifting and having an affair with several students in her dorm. Holly spoke out about her experience, and school administrators asked that she withdraw from the school and seek psychiatric help. Ultimately Holly was referred to an early psychosis program. After a short trial of medication Holly told her counselor she would like to return to school. In exploring that option the school was reluctant to re-enroll her given her current symptoms, which were improved, but still present. Holly agreed to put her goal of returning to school off for a year while she explored vocational options, although she was unsure if she really wanted to work for a while or put her efforts towards going back to school right away. Her counselor referred her to the early psychosis program's Employment Specialist (ES), John who followed the Individual Placement and Support (IPS) model of supported employment.1 At Holly's request, John met her at the college career center instead of the mental health center since it felt like a less stigmatizing environment. They completed some online career inventories and explored the job market.

IPS supported employment is an evidence-based practice that follows eight principles aimed at supporting individuals with severe mental illness in their efforts to return to work.2 The principles include:

IPS was originally developed to help individuals with severe and persistent mental illness return to work. Because most early psychosis participants are late adolescents or young adults just beginning their careers, it is essential that the ES utilizing the IPS model also integrate the principles in supporting the individual as he or she decides to stay in, return to, or engage in high school or post-secondary education. Essentially supported education is as important as employment, and the ES should support both school and work options using the same IPS principles.

John, Holly's IPS ES, knew that Holly was studying political science, and approached a political action agency to learn if they needed support. They had an opening for a phone surveyor calling constituents to seek support of their cause. John approached Holly about the opening. Holly expressed interest in applying but based on the stigma and discrimination she experienced at her college she would not disclose her condition to the agency. John worked with her to research the agency, helped her complete the application, and practiced a mock interview. Holly applied, interviewed, and was offered the position.

The first several weeks on the job went well for Holly. However, as the job demands increased, Holly began to experience an increase in symptoms. She reported this to John via text message and an app that tracks her specific symptoms. John immediately reported the increase of symptoms to her treatment team, who began working on coping skills and medication adjustment. The counselor suggested that Holly talk to her boss about taking a break when she experienced increased symptoms. Holly and John came up with some language she could tell her boss when she needed a break, so that she did not have to disclose her symptoms.

As Holly continued to work, her boss offered her more and more hours to meet the demand of the agency. Holly began to earn money at a rate that put her Medicaid insurance at risk. John met with Holly and her parents to review her benefits options and figured out the best way for her to continue to work the hours she desired and still earn medical benefits. With Holly's permission, John also met with her family to educate them on the options around insurance, as her family assumed the only way for Holly to continue being insured was to stay below the Medicaid income limit.

Over the next year, Holly expressed interest in returning to college to complete her degree, but she feared that if she used the disability services office (DSO), they would disclose her condition to the administration. Additionally, Holly did not see herself as having a disability and did not see the need to connect with an office with the term "disability" in its title. With Holly's consent, John began to work with the DSO to start the process of returning to school. John let the DSO know of Holly's concerns and the staff agreed to meet with her outside of the DSO office at the college coffee shop and explain her rights. They built a relationship with Holly on her own ground, and did not force her to go to the office where she already felt stigmatized.

The above scenario represents a typical supported employment referral from an early psychosis program. Although the principles of IPS are generalizable to individuals in early psychosis programs, and research supports the model's effectiveness with these individuals,3 some modifications are needed to address the specific cultural needs of this population. The following recommendations and modifications to IPS in working with young adults with early psychosis were developed by Dartmouth University in collaboration with Oregon Department of Vocational Services, Early Assessment and Support Alliance (EASA) participants, and EASA clinical and supported employment staff.2

Young adults are at a stage of developing self-identity and want to try different experiences. They may fluctuate in their desire to work or go to school. Help them explore both options and continue to engage young people during periods of uncertainty. Do not confuse ambivalence and developing an identity with lack of motivation. Peers with work or school experiences can help engage other young adults who are unsure about their goals. Young adults may not want to disclose their condition to employers or schools for various reasons. Although it may be helpful in some cases, disclosure may not be necessary to improve vocational or educational outcomes.4

Holly was reluctant to explore employment given her goal of returning to college. Also, given her experience with the college she was not interested in disclosing her condition to employers. The ES viewed Holly's uncertainties as normal developmental issues and understandable given her recent situation with the college – as opposed to unwillingness or lack of motivation to work.

Young adults typically see themselves as healthy and invincible rather than as persons with disabilities. They are more likely to engage in services that focus on their strengths and opportunities rather than on diagnosis or disability. Help them consider short-term and long-term career goals. For some, the focus is on educational goals that match their career goals. Help young people explore career opportunities by asking questions such as:

John worked with Holly to find employment positions that supported her interest in political science and her long-term vocational goals. He met with the hiring manager to learn about the organization and what types of individuals were successful working there. IPS for early psychosis participants keeps the focus on long-term career goals and not just establishing a job.

With the young adult's permission, invite family members to some employment/education meetings. The young adult can define family to include friends, partners, or other supporters. Family members contribute information about the individual's strengths, skills and past education. Friends often have a strong influence in the person's life and share information from a young person's perspective. Ask the young adult "Is there anyone else who has given you helpful ideas? Would you like to invite that person to a meeting?" Educate the family about career development. For example, explain that it is normal for young people to try different jobs. Some jobs may be short-term or brief, but are still learning experiences. Educate the family about how to support the young adult in his work and school experiences. Talk with the family about whether this approach challenges the family norms and culture.

Holly's family was concerned that the only way for her to stay insured was to limit her work hours. John was able to provide them with information regarding a range of options.

Young adults often shun traditional clinical settings. Create an environment that is more conducive to a younger population by creating separate waiting rooms for young people, displaying materials that are marketed towards youth, and equipping the space with computers. Community locations are often more appealing to young adults than meeting in a clinic. Ask each person where she likes to spend time and offer to meet the young person there.

John met with Holly at the community college. This normalized the job exploration process for her.

Tip 5: Engagement and Use of Technology

Many young adults prefer to communicate through texts, emails, and instant messages rather than by phone. In addition, many job applications require online access. Social media, such as LinkedIn, provide employment connections that aid job searches. Review and revise agency policies about communicating using technology and ensure that computers used by the IPS program have access to job-seeking sites.

Holly preferred the use of text messaging to communicate with John how she was doing on the job. She also used a symptom tracker app that she could share with John and the treatment team to let them know how the stress of the job was impacting her symptoms.

Holly did not want to decrease her work hours to maintain her benefits. She saw this job as experience leading to a long term career path and felt decreasing hours would hurt that goal. John engaged with Holly around benefits offered by her job and benefits thatwould be available to any young person in her situation as opposed to limiting benefit planning to keeping Medicaid and/or Social Security.

Young adults often have little or no employment history. Exploring the world of work through summer jobs, internships, AmeriCorps, and additional schooling or certification is normal. When young adults prefer help with permanent, competitive jobs, follow their lead and do not require or encourage non-competitive positions.

Volunteer experiences are generally discouraged in the IPS model; however, they may make sense for the young adult attempting to learn the world of work and gain experience for careers. When a person expresses a preference for an internship or volunteer job, explore available positions that will help her gain skills and experience related to her career goals.

Given Holly's limited job experience, John and Holly used an online career search system that allowed her to take interest inventories, learn about jobs she did not know existed, identify necessary skills for specific jobs of interest, and understand job availability and school options.

Young adults often avoid programs that use disability-related language. For example, names such as Office for Student Disability Services, or Rehabilitation Services are sometimes discouraging. When connecting young people with these services, prepare the young person for the language and perhaps modify the process. For example, a vocational rehabilitation counselor could meet the young adult at the mental health office or another community location.

For Holly the thought of going to a DSO was stigmatizing. John arranged for the DSO staff to meet with Holly outside of that office to build a relationship and describe what they could offer her to support her goals of returning to school.

Although IPS has been found to be successful with working with young adults with early psychosis, it is important to remember that mental health programs must adapt their approach to fit the developmental stage, culture, and belief systems of young adults with psychosis.

For more information on the IPS Model, please visit: http://www.dartmouthips.org/resources/programs/program-tools