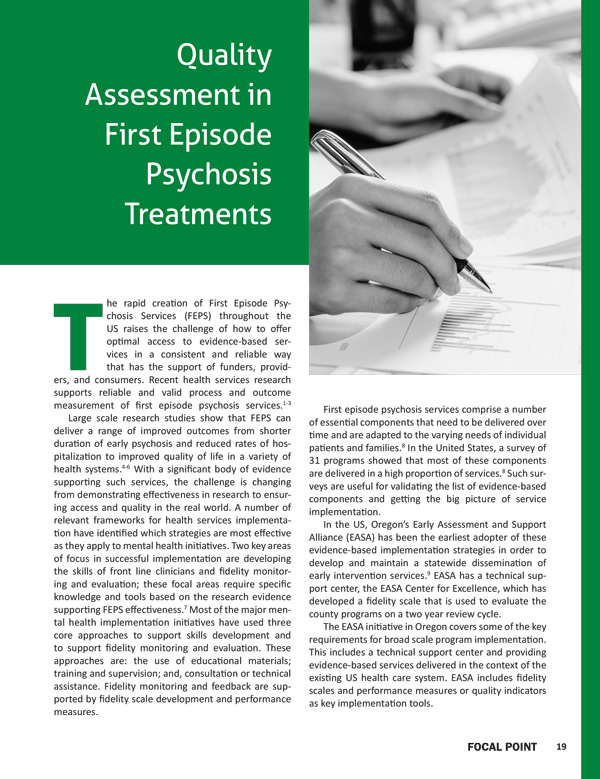 The rapid creation of First Episode Psychosis Services (FEPS) throughout the US raises the challenge of how to offer optimal access to evidence-based services in a consistent and reliable way that has the support of funders, providers, and consumers. Recent health services research supports reliable and valid process and outcome measurement of first episode psychosis services.1,2,3

Large scale research studies show that FEPS can deliver a range of improved outcomes from shorter duration of early psychosis and reduced rates of hospitalization to improved quality of life in a variety of health systems.4,5,6 With a significant body of evidence supporting such services, the challenge is changing from demonstrating effectiveness in research to ensuring access and quality in the real world. A number of relevant frameworks for health services implementation have identified which strategies are most effective as they apply to mental health initiatives. Two key areas of focus in successful implementation are developing the skills of front line clinicians and fidelity monitoring and evaluation; these focal areas require specific knowledge and tools based on the research evidence supporting FEPS effectiveness.7 Most of the major mental health implementation initiatives have used three core approaches to support skills development and to support fidelity monitoring and evaluation. These approaches are: the use of educational materials; training and supervision; and consultation or technical assistance. Fidelity monitoring and feedback are supported by fidelity scale development and performance measures.

First episode psychosis services comprise a number of essential components that need to be delivered over time and are adapted to the varying needs of individual patients and families.8 In the United States, a survey of 31 programs showed that most of these components are delivered in a high proportion of services.8 Such surveys are useful for validating the list of evidence-based components and getting the big picture of service implementation.

In the US, Oregon's Early Assessment and Support Alliance (EASA) has been the earliest adopter of these evidence-based implementation strategies in order to develop and maintain a statewide dissemination of early intervention services.9 EASA has a technical support center, the EASA Center for Excellence, which has developed a fidelity scale that is used to evaluate the county programs on a two year review cycle.

The EASA initiative in Oregon covers some of the key requirements for broad scale program implementation. This includes a technical support center and provision of evidence-based services delivered in the context of the existing US health care system. EASA includes fidelity scales and performance measures or quality indicators as key implementation tools.

Fidelity scales provide a list of objective criteria by which a program or intervention is judged to adhere to evidence-based practices. Fidelity measures are comprised of process measures and structural measures that together assess the degree to which a program delivers evidence-based components of care. Fidelity scales have been widely used in mental health services research, implementation, and quality control. They can be developed based on the effective components of a program model that has research evidence to support its effectiveness or they can be derived from the entire literature on the efficacy of programs or components of programs. There has been limited application of fidelity scales in first episode psychosis research and implementation but that is changing rapidly.

Performance measures or quality indicators are broader in application and can be used at the individual, program, or health system level. In order to evaluate programs, a number of domains can be assessed including: accessibility, efficiency, appropriateness, and outcome. Since fidelity scales address the process of care, they are best linked with performance measures or indicators that measure outcomes in order to assess the overall quality of health care. These indicators have been described as "Norms, criteria, standards and other direct qualitative and quantitative measures used in determining the quality of health care."10

Fidelity scale development for first episode psychosis services was first undertaken in the United Kingdom. The Early Intervention Services (EIS) fidelity scale was developed using an expert clinician consensus process and refined by researchers. The scale has been applied in one program evaluation in the UK but has not been described in the peer reviewed literature. In the US,Oregon EASA developed a fidelity scale using a process of expert committees tied to practice guideline development. It has been used in support of program implementation and quality control.

A different approach to fidelity scale development was used to develop the First Episode Psychosis Services Fidelity Scale (FEPS-FS). The scale was developed by first identifying effective treatments from the research literature then measuring the strength of that evidence. In the second step, a group of international experts was provided with the results of the first stage and asked to identify what it considered to be the essential evidence-based components.8 This list formed the basis for developing a 31-item fidelity scale with definitions of each component paired with a 1 to 5 rating scale. This scale has been tested in six programs in both the United States and Canada and found to be reliable and to have face validity. This fidelity scale had fewer items than the ones mentioned above, but a higher proportion of items that were common to all the scales.

In summary, funding and establishment of First Episode Psychosis Services offers the opportunity for patients and families to access programs that provide optimal evidence-based care for a first episode of psychosis. The use of performance measures and fidelity scales can ensure that these programs meet standards of care.