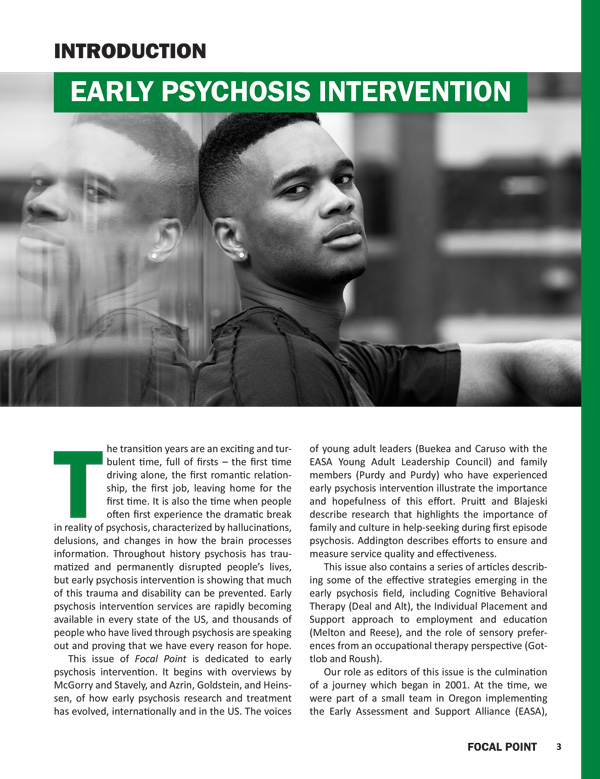 Abstract: This introduction from Guest Editor of Focal Point Tamara Sale, Director of the Early Assessment and Support Alliance (EASA), outlines the various perspectives from which this issue's authors examine early intervention.

The transition years are an exciting and turbulent time, full of firsts – the first time driving alone, the first romantic relationship, the first job, leaving home for the first time. It is also the time when people often first experience the dramatic break in reality of psychosis, characterized by hallucinations, delusions, and changes in how the brain processes information. Throughout history psychosis has traumatized and permanently disrupted people’s lives, but early psychosis intervention is showing that much of this trauma and disability can be prevented. Early psychosis intervention services are rapidly becoming available in every state of the US, and thousands of people who have lived through psychosis are speaking out and proving that we have every reason for hope.

This issue of Focal Point is dedicated to early psychosis intervention. It begins with overviews by McGorry and Stavely, and Azrin, Goldstein, and Heinssen, of how early psychosis research and treatment has evolved, internationally and in the US. The voices of young adult leaders (Buekea and Caruso with the EASA Young Adult Leadership Council) and family members (Purdy and Purdy) who have experienced early psychosis intervention illustrate the importance and hopefulness of this effort. Pruitt and Blajeski describe research that highlights the importance of family and culture in help-seeking during first episode psychosis. Addington describes efforts to ensure and measure service quality and effectiveness.

This issue also contains a series of articles describing some of the effective strategies emerging in the early psychosis field, including Cognitive Behavioral Therapy (Deal and Alt), the Individual Placement and Support approach to employment and education (Melton and Reese), and the role of sensory preferences from an occupational therapy perspective (Gottlob and Roush).

Our role as co-editors of this issue is the culmination of a journey which began in 2001. At the time, Ryan Melton and I were part of a small team in Oregon implementing the Early Assessment and Support Alliance (EASA), the first implementation of early psychosis intervention in the US public mental health system. In 2007 our responsibilities grew from work in the original five counties to coordinating the first statewide roll-out of early psychosis implementation. In 2013 we formed the EASA Center for Excellence at Portland State University. From this center of excellence, we continue to collaborate and support service development in Oregon and throughout the country.

Throughout this journey our graduates and family members have become great advocates for our common vision. We aspire to ensure rapid access to services that are voluntary, strengths-based, well-grounded in evidence, and guided by individual and family partnerships and shared decision making.

We are grateful to those who wrote for this issue. They are some of the finest colleagues we have gained along the way. We also acknowledge the contributions of many who are not represented here. We are in the midst of a dynamic and growing movement – and we are thrilled to be part of it.