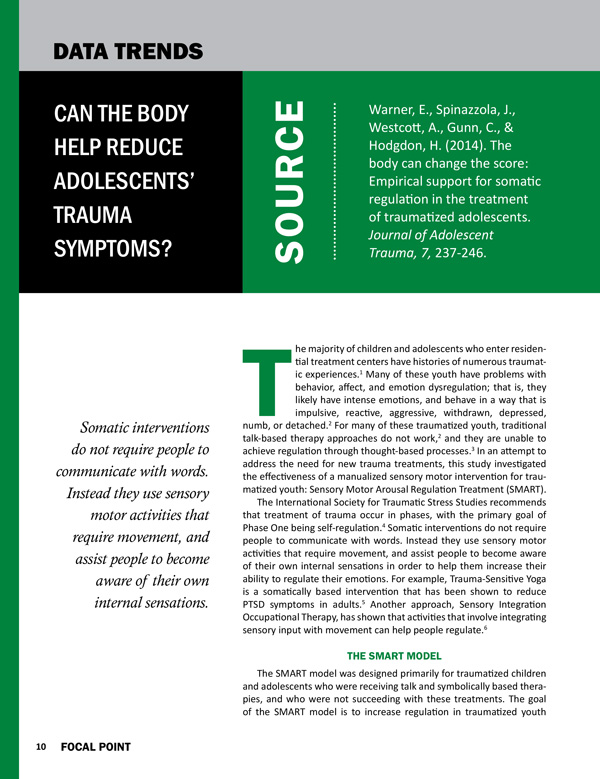 Abstract: This segment of Data Trends describes how therapies involving sensory movement may help reduce the symptoms of trauma in youth who have been previously unsuccessful with traditional talk and symbolically-based therapies.

The majority of children and adolescents who enter residential treatment centers have histories of numerous traumatic experiences.1 Many of these youth have problems with behavior, affect, and emotion dysregulation; that is, they likely have intense emotions, and behave in a way that is impulsive, reactive, aggressive, withdrawn, depressed, numb, or detached.2 For many of these traumatized youth, traditional talk-based therapy approaches do not work,2 and they are unable to achieve regulation through thought-based processes.3 In an attempt to address the need for new trauma treatments, this study investigated the effectiveness of a manualized sensory motor intervention for traumatized youth: Sensory Motor Arousal Regulation Treatment (SMART).

The International Society for Traumatic Stress Studies recommends that treatment of trauma occur in phases, with the primary goal of Phase One being self-regulation.4 Somatic interventions do not require people to communicate with words. Instead they use sensory motor activities that require movement, and assist people to become aware of their own internal sensations in order to help them increase their ability to regulate their emotions. For example, Trauma-Sensitive Yoga is a somatically based intervention that has been shown to reduce PTSD symptoms in adults.5 Another approach, Sensory Integration Occupational Therapy, has shown that activities that involve integrating sensory input with movement can help people regulate.6

The SMART model was designed primarily for traumatized children and adolescents who were receiving talk and symbolically based therapies, and who were not succeeding with these treatments. The goal of the SMART model is to increase regulation in traumatized youth so that they may benefit from conventional means of therapy. In order to do this, therapists utilize a variety of sensory motor equipment that targets the different body systems involved with organizing and calming the body.2 Youth are invited to interact with the equipment of their choice. The authors expected that the invitation to use this equipment would help to begin the therapy process with youth who were distrustful and fearful, and that children and adolescents who participated in SMART would be able to more rapidly engage in processing trauma.

This study used a matched group design comparing 10 young people assigned to the SMART intervention group with 21 who were in treatment as usual (TAU). The TAU condition consisted of weekly individual talk therapy sessions. Both groups engaged in milieu therapy at the residential centers that were trial sites. Groups were matched on age, ethnicity, number and types of traumatic experiences, and severity of clinical symptoms. The authors collected data before and after the intervention, with the average length of treatment being 9 months, and a range of 6 to 12 months.

Study participants ranged from age 13 to 20 with an average age of 16; 90% were female. The young people were diverse: 55% Caucasian, 20% Hispanic/Latino, 16% African-American, and 7% biracial. The majority of the study participants met criteria for multiple mental health diagnoses, and trauma histories included emotional, physical, and sexual abuse; neglect; and impaired caregiving. The average number of reported traumatic experiences was 6.5.

For the SMART condition a room was created within the treatment centers in which all office furniture was removed, athletic floor mats were put down, and equipment used in sensory integration therapy such as fitness balls, mini trampolines, weighted blankets, large floor pillows, and balance beams were installed. The room was equipped with a videotaping system that recorded all sessions. All participants signed consent forms to be video recorded. Participants were invited to examine and try out the equipment. Therapists would then work with the participants to assist them in becoming aware of how to self-regulate, and/or co-regulate with the help of the therapist and using the equipment.

The Trauma History Profile7 was used to collect baseline data from multiple sources: the participants, parents/caregivers, and relatives. The Child Behavior Checklist (CBCL),8 completed by parents/caregivers, reported on behavioral and emotional problems in children and adolescents, and measured externalizing behaviors (focused towards others; e. g, aggressive and defiant behaviors) and internalizing behaviors (focused towards self; e.g. depression, anxiety, withdrawal). The PTSD-RI,9 a self-report scale, assessed symptoms of PTSD in participants.

The authors reported that this study provides preliminary support for the possible effectiveness of the SMART model in reducing internalizing symptoms often linked with complex trauma in children and adolescents. The authors stated that the SMART model may be particularly effective at reducing anxious and depressed moods, as well as problems of hyper-arousal in this population. More meticulously controlled research with a larger sample size is needed before more conclusive statements about the efficacy of the SMART model can be made.

One strength of the study is that the measures used reported on the level of functioning across all hours of the day, not just what occurred within the therapy session, which resulted in more accurate reports of overall effectiveness of an intervention. Secondly, therapists, educators, milieu staff, and participants who completed measures were not aware that the data might be used to measure the effectiveness of the SMART model, thereby controlling for bias. A limitation of the study was the potential for selection bias as some youth and/or guardians did not consent to the youth being video taped. This prevented them from participating in the study. Therapists and supervisors chose which conditions to place participants in based on severity of symptoms and clinical need, again introducing the possibility of bias.

This study offers preliminary support for the SMART intervention, and is an important step in adding empirical evidence for sensory motor-based interventions to the field of trauma-informed care.