Healing Through Artistic Expressions of Trauma 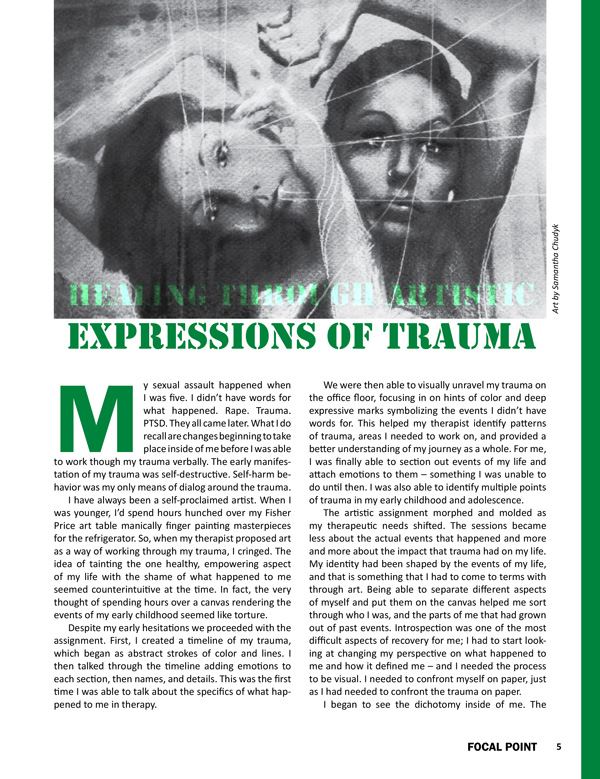 Abstract: A sexual assault survivor explains how the power of artful expression transformed her personal interpretation of trauma and enabled healing reflection through nonverbal communication.

"Healing Through Artistic Expressions of Trauma" (2015)

My sexual assault happened when I was five. I didn't have words for what happened. Rape. Trauma. PTSD. They all came later. What I do recall are changes beginning to take place inside of me before I was able to work though my trauma verbally. The early manifestation of my trauma was self-destructive. Self-harm behavior was my only means of dialog around the trauma.

I have always been a self-proclaimed artist. When I was younger, I'd spend hours hunched over my Fisher Price art table manically finger painting masterpieces for the refrigerator. So, when my therapist proposed art as a way of working through my trauma, I cringed. The idea of tainting the one healthy, empowering aspect of my life with the shame of what happened to me seemed counterintuitive at the time. In fact, the very thought of spending hours over a canvas rendering the events of my early childhood seemed like torture.

Despite my early hesitations we proceeded with the assignment. First, I created a timeline of my trauma, which began as abstract strokes of color and lines. I then talked through the timeline adding emotions to each section, then names, and details. This was the first time I was able to talk about the specifics of what happened to me in therapy.

The artistic assignment morphed and molded as my therapeutic needs shifted. The sessions became less about the actual events that happened and more and more about the impact that trauma had on my life. My identity had been shaped by the events of my life, and that is something that I had to come to terms with through art. Being able to separate different aspects of myself and put them on the canvas helped me sort through who I was, and the parts of me that had grown out of past events. Introspection was one of the most difficult aspects of recovery for me; I had to start looking at changing my perspective on what happened to me and how it defined me – and I needed the process to be visual. I needed to confront myself on paper, just as I had needed to confront the trauma on paper.

I began to see the dichotomy inside of me. The broken bits, the wounded parts, the sections of me that had scarred over, the sections that were still raw, the strong parts, the healed parts, parts that were still untouched, and the parts that I was still growing into. I began to see something outside of the trauma, someone outside of the trauma. Under all that soot I was still alive.

My art became my memoir. It became my voice inside and outside the walls of therapy. Art became a mechanism of empowerment, of owning what had happened to me, and not letting it define me. From my trauma had sprouted a talent I had long forgotten about, and a weak voice that grew steadier and steadier.

I now use art as a tool in my youth mentor role. Many of the youth I work with are more comfortable opening up the lines of communication with a paintbrush and a sketchbook than they are with words. Art also gives youth and adolescents who experienced trauma something that is theirs, something to build with. One of the youth I mentor describes art as her creation from destruction.

The artistic assignments I use to engage youth are very different from the assignments I was given. They depend on how trauma has shaped the youth's perception of self, and how trauma has affected their identity. Many of the assignments work on self-portraits, on seeing different sides of their self, their future, their goals, their roadblocks, their past – what propels them forward, and what holds them back. These are big questions to ask of fourteen, fifteen, and sixteen year-olds, but I find that they can better illustrate goals and roadblocks with pictures than with words.

Sometimes strengthening the voice inside means innovation in terms of looking at different modes of therapeutic communication. This can include (but is not limited to) traditional forms of art. Survivors need to process in ways they feel most comfortable, for instance: poetry, dance, music, movement, or simply talking. My own journey along this pathway taught me that if we can allow survivors to use their trauma to fuel something, it can be a very powerful experience of gaining strength and hope through healing.